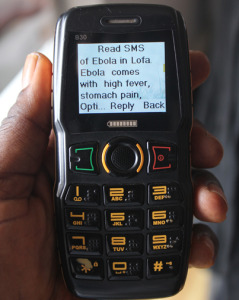 The world is awash with data. Every time someone walks down the street with their mobile phone, every time a satellite orbits the earth, and every time a product with a barcode is loaded or unloaded from a truck or a ship, data is created that can be, and increasingly is, pored over, analysed and examined for patterns and insights.

Despite this flood of information in some parts of the world, there are still people and things, in other parts of the globe, about which very little is known. Data on some people is almost nonexistent, and they tend to be the most marginalised, the poorest and the excluded.

We don’t know, for example, how many children with disabilities are out of school. We don’t really know how many women in the poorest countries die in childbirth – what we have are estimates based on other, often quite unreliable, information. Not knowing makes it easier to ignore hardship and injustice – and even where governments or other organisations do want to act, it makes it harder to know what to do.

Of course, this has been the case for a long time. But that may be beginning to change. Suddenly, numbers are in fashion. The “data revolution” is the idea of the moment, and it’s hard to find anyone who doesn’t think that more money, innovation and effort should be poured into counting and measuring, and that more open data can help to unlock the corridors of power.

A high-level group has just been appointed by the UN secretary general, Ban Ki-moon, to come up with ideas for how to make this happen – a group that brings together academics and activists, the people who manage data for governments and the people who put together the global numbers.

These data revolutionaries met for the first time in New York last week. The job is to work out how to bring together the old and the new worlds of data – the government statisticians with the Silicon Valley developers; the citizen movements mapping their unmapped cities with the custodians of global numbers in UN agencies. All of these groups, and more, have something to contribute to increase the quantity, quality and usability of data – and to put it to work to improve people’s lives.

How can new technologies and the almost daily innovations in how the world is recorded, tracked and monitored be used to fill some of the most critical data gaps? How can the hard-pressed statistical offices in many developing countries be resourced and reorganised through innovation to cope with the growing demands of governments and citizens for more information? How can data from mobile phones and other devices be brought out of the private domain and used to serve the public good, without compromising privacy or safety? How can data be better joined up so we get more value from what is discovered?

This is an opportunity for change. An upheaval in measurement is coming, with the agreement next year of new global goals to monitor progress – which could include everything from land degradation to the quality of secondary education; from road traffic accidents to increased economic productivity. The goals will be accompanied by a monitoring framework, which will require governments to pay more attention to how, when, and to what standards, they measure these things.

If the last set of global goals – the millennium development goals – is anything to go by, one response to this will be more investment in data, a stronger focus on getting the numbers right, and greater public interest in the data produced.

This is a chance to bring that political demand for better data together with the technological opportunities and combine these with the popular movements in many countries calling for more open, accessible and useful data. This could, if we get it right, create a step change in what is measured, how it is measured, and who gets to see the numbers.

If the data revolution group is to make the right recommendations to the UN and to governments about how to rise to this opportunity, the widest possible range of people needs to be involved. The group needs to hear from everyone with an interest in, or ideas about, how to make information better, more available and more useful. You can feed into the process through this website.

Image: In a world of mobile phones we are awash with data but there are still significant gaps. Photograph: UNICEF