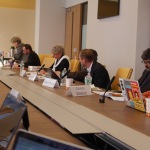 The Independent Expert Advisory Group (IEAG) on a data revolution for sustainable development was convened last week at UNHQ 25th-26th September, during General Assembly, for two day-long sessions. Below is a brief overview of the various sessions and some of the issues discussed.

The group reviewed their mandate and agreed that it included defining what a data revolution for development means, suggesting measures to close data gaps, and seeking opportunities for new innovations and data sources while strengthening accountability at all levels. The group discussed the substance and timing of the report to Secretary-General Ban Ki-moon, due in early November.

During the initial discussion, group members highlighted several important issues including what the group means by the data revolution for development. Many members of the group view this concept as more of an evolution or accelerated data evolution, rather than a completely new paradigm, while others focused on the possibilities associated with big data and privately produced information.

Members of the group highlighted the fact it is imperative to ensure that the data is of sufficient quality and that because the mandate is for a data revolution for development, the goal of the data revolution should be to provide a framework for and investment in data that helps in achieving the SDGs and in monitoring and accountability.

The idea that the information demand for the SDGs will exceed the capability of data collection efforts was underscored. Even developed countries would need help in improving their efforts. Members mentioned that there are two things that are distinct: technological progress (which is inevitable) and what this progress means for official statistics. The role of National Statistical Systems in this new world could be an important point of discussion regarding the data revolution.

Other recurring themes during the discussion were the increase in the generation of data in the private sector and the implications of that for questions of the regulation and management of information, and a continual focus on the purpose of data for decision making, for accountability and for tracking progress. The group highlighted the need to align the frequency and format of data collection to decision making cycles in the public sector and elsewhere.

Mr. Eliasson presented his idea of what the data revolution should be and it involves measures to close data gaps and to strengthen national statistical capacity to respond to the demands of a complex development agenda. He also mentioned the need to leverage new, non-traditional data like big data and that a data revolution of about far more than data and statistics, but also about how they are used.

The group then commented on Mr. Eliasson’s presentation and asked him questions including how this report can be made most useful in order to impact decisions, the process over the next several years, and on data as a human right. Mr Eliasson responded by directing the group to look at the OWG outcome document to see that countries feel the need for transformative change.

Read the Deputy Secretary-General’s full remarks at this event

On Friday 26th September, the Independent Expert Advisory Group held a Townhall event and some in-depth sessions centered around a specific topic of the data revolution, with members of civil society, academia and the private sector. These served as a listening session for IEAG members, with representatives from over 60 civil society organisations in attendance.

One of the main issues discussed in this session was making data more open, potentially through Freedom of Information Acts, however, a problem is that even when these laws exist, many times they are not implemented. There was agreement among the entire group that data that is not confidential should be openly available. One big issue here is the capacity of people to find and understand the data that exists.

Discussion of possible open data standards created on the international level; the Open Government Partnership could be used as a model. A second issue with open data that was discussed was the risk of spreading data that is not high quality. A potential solution to this was the proposal of creating some sort of audit agency for open data and statistics. The European Union currently has something similar in place and an audit is conducted every five years. Many of the members emphasized that this audit must be done by an independent organization. Overall there was consensus in this meeting that there is a need for more open data, but that in order to make this a reality, efforts need to be made to ensure this data is of a high quality and that there is accountability of the data producers to protect confidentiality and privacy concerns.

This session was designed to discuss how the data revolution can be leveraged to make measurement of the SDGs more feasible. Some of the participants from civil society stated that there will be a need to move beyond quantitative indicators to more qualitative measures for measuring human rights-based targets. There was a strong point made that a lot of data currently exists but is not shared. For instance, many NGOs collect survey data at the local level but this data is not shared with NSOs or government agencies. Participants stressed that better coordination amongst a wide array of partners could go a long way to improving the measurement of the SDGs.

The importance of inclusiveness was discussed in relation to gathering data. Many times those people or groups most in need of measurement are not measured due to the difficulty of measuring them, the data revolution needs to ensure that all people and groups are included. Administrative records are an important source of information and this information needs to be made available to National Statistical Offices (NSOs) .

Another point for measuring the SDGs is that it will be important to have an adaptive monitoring system that will enable those involved to development new techniques to account for those being excluded. Feedback loops would help with this.

Finally, the point was made that maybe instead of data being seen as supporting and monitoring other sectors of development, data should be viewed as a development objective in and of itself. Finally, there was a great deal of consensus that there needs to be less of a focus on global aggregates and global reporting and more emphasis on data at the national and local level.

Challenges and Opportunities of Big Data and New Technologies

One of the biggest problems with big data is that currently it is almost all solely in the hands of the private sector. How can this data be made more public? The point was made that this fact is troubling from a development perspective as the private sector has very different objectives to the public sector and is not necessarily invested in the post-2015 agenda.

There was broad agreement that norms need to be developed around big data and that there needs to be trust in the confidentiality and reliability of this data.

Another issue is that it is very difficult to infer causality with big data and as a result, big data will not be a panacea for the availability of development data. There was no real agreement on how to address big data, other than it will be an important part of the future and needs to be closely examined.

Finally, the point was made that there are equity issues with big data, as the digital divide can exacerbate the ability to collect information using big data.

Image 2: Independent Expert Advisory Group speak with Civil Society representatives in themed sessions, this one focused on the challenges and opportunities of Big Data and innovations.